Afternoon everyone! Last week I was on a lippie kick (seriously, I bought 7 lippies last week!) and I’d like to start showing you the lip products I bought and reviewing them. First up today is a newer product from Maybelline called Vivid Matte Liquid. I bought three shades: Nude Thrill, Fuchsia Ecstasy, and Vivid Violet.

Formula on these was kind of strange. They were thick in the swatches but spread smoothly and evenly on the lips. But dang, they never ever dried! They also didn’t really dry to a “matte” finish.

I wore Vivid Violet for 4 hours and here’s how it looked after that time. Pretty much worn off totally, and my lips showed every crack, line, and bump. Ick. (To be truthful, I didn’t almost show you this picture!)

When I wore Fuschia Fantasy, I had major feathering, so if you purchase that one, be sure to use a lip liner. It did leave a nice stain though.

My favorite of the three is probably Nude Thrill, but to tell the truth, I’m not real thrilled with any of them. Have you seen these anywhere or bought any?

What I’m wearing for my eyeshadows, if you care to know, are all from the Urban Decay Vice 4 eyeshadow palette. Eyelid is Grip, outer vee is Deadbeat, lower lid next to outer vee is 1985, brow bone is Bones.

Good morning everyone! 🙂 I’m so excited to be back posting about the Radiant Orchid nail polishes, and I hope you’re excited too. 🙂

Today’s nail polishes will be all those that fit within the berry spectrum of Radiant Orchid. I’ve used one coat of top coat on each of the following, except for Maybelline Lasting Lilac, since that is supposed to have a matte finish. If you’ve missed them, here are parts one, two, three, four, and five. I’m using this color pyramid by Sephora as a guideline:

essie the girls are out:

Wet N Wild Through the Grapevine:

So many in this group are ones that I love but I think Sinful Colors Fig just edges out the others, with Sagitta coming a close second.  What are your favorites from this selection? Don’t forget, I’d love to do a comparison post, so if you’d like to see any polishes compared to another, just ask! 🙂 The second to last post will be the Radiant Orchid glitters/holos. I can’t wait for those! Until tomorrow,

Hi everyone! We’re part way through the Radiant Orchid series. If you’ve missed them, please check out part one and part two. Today’s polishes will be the darkest of the series. A reminder of the color:

And the color pyramid I’m using:

OPI Honk If You Love OPI:

What do you think of these dark and vampy colors within the Radiant Orchid color family? I think my favorite of this round is Milani Hipster Plum – and the best part is that I only paid $1 for it when I got it at the Dollar Tree! 😀

The next post in this series will be the light pink/purple ones – totally not my usual style, but it’s nice to have a change of pace from the “usual.” Remember to let me know if you’d like to see any of these polishes (or ones from part one & part two) next to each other on the nail, my last post in the series will be comparisons. Tomorrow I will have another Xmas mani up, so until then,

Good morning! I have some silly animals for you today! I didn’t want to do an animal pattern or print, so I tried my hand at doing actual animals. I wanted to do a desert scene with bright blue sky, shimmering sand, and camels. Let’s take a look!

I started off with a base of OPI My Vampire is Buff, then painted Wet N Wild Teal Slowly & See over it for the blue sky. For the shimmering sand, I added butter LONDON Tart with a Heart over MVIB. For the camels, I used a combination of Maybelline High Style Sienna with MVIB and OPI Black Onyx.

Well, they’re definitely not perfect, but I’m glad I’m getting the chance to practice my artistic skills. Check out the rest of the awesome animal manicures by clicking below:

Let me know what you think of my camels! Until tomorrow,

Hi everyone! I’ll be honest, it was a real struggle for me to find a pattern or print or artwork for me to imitate for today’s nail challenge. Then I stumbled across the work of artist Pristine Cartera-Turkus, in specific this painting: 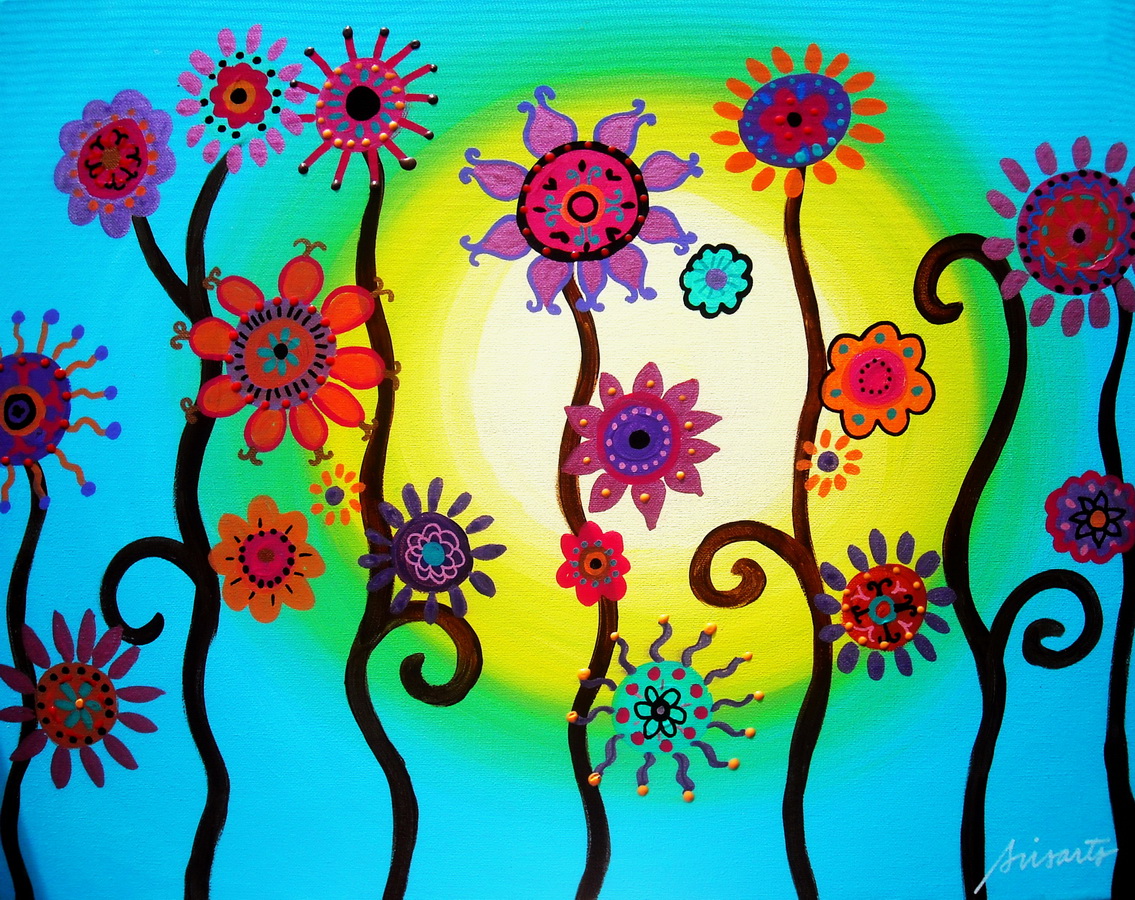 And I knew I wanted to try recreating it on my nails. I started off with 2 coats of Sally Hansen Himalayan Blue:

I love this color, and it levels so nicely but it is a stainer for sure!

Now, I know that my interpretation isn’t perfect, in fact it doesn’t come really *that* close, but I actually really like how it ended up. What do you think? Be sure to check out the rest of the manicures for today by clicking here:

I’m hoping to have a very special manicure later today, so check back then! Until later,

I had so many different ways I wanted to title today’s Fashion Friday, mainly because my inspiration comes from an ad for Malibu Rum:

Up Close and Personal:

I started off with 2 coats of Maybelline Coral Glow. I then used a striping brush to make half-oval shapes on each nail with JulieG Ornamental:

Lastly, I added some dots with Ornamental:
Inside, flash:

Outside, no flash, sunlight:

I don’t like how my pinky came out, but otherwise I like it! Do you like it with or without the dots? I hope you are gearing up for a fun weekend! 😀 Until the next time,

Hello all! 🙂 I am having a much better start to my morning this morning, and am hoping that today will be a really good day. It’s going to be hot here, so my kids and I are going on a bike ride early, then this afternoon we are going to be getting in the pool! 🙂

I’ve used Maybelline Coral Glow and Passionate Plum – both are such gorgeous colors! I started off with 2 coats of Coral Glow:

I love this color! It is a pinky toned coral, with a lovely shimmer. This is also without topcoat – and it is extremely shiny! The formula was a bit thin, so I needed to be extra careful around my cuticles.

This came out so lovely, and I like how “in yo’ face” it is.

Check out the other metallic manicures today by clicking here! Tomorrow I will have a striped manicure that I’m ridiculously excited about, but until then,

If you'd like to use my photos, please email me to ask permission at behappybuypolish - AT - gmail DOT com. Link back and credit must be given. Photos may not be altered in any way, and my content may not be used for profit. This is non-negotiable. Editing another person's photos or removing watermark is unacceptable and I will protect my copyrighted images to the fullest extent of the law.